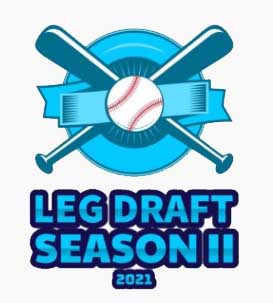 Well, the first annual Draft in LEG was completed today. And how did it go? Pretty good me thinks. Time wise it kept moving at a good pace. Could a been better, could a been worse. I thought it did good. Some teams got skipped and some skipped themselves. Considering we have teams all over the map in different time zones, I thought everyone did a great job and the Draft moved on.
To me it was an interesting draft mainly due to the salary cap situation that limited some teams as to what they could do with their picks. I know some teams stayed below certain salaries and drafted players they could afford rather than players they wanted. But it all worked out. So how did the first round go? Let’s see. Out of the first 32 picks,… 19 starters were picked, 3 relievers, 1 firstbaseman, 3 secondbasemen, 1 thirdbaseman, and 5 outfielders. I wasn’t surprised by the number of starters chosen. There were 13 good starters graded 16 and above available in the draft and 8 of them were taken in the first 10 picks. In fact, the first 3 picks were starters. Not a big surprise there as they were all graded 20 and above.
So let’s take a look at each pick.

#2 and #3 Las Vegas R.Kremer SP 20 and E.Moore SP 20 Vegas made a trade that put them in position to bolster their pitching staff,…and they did. Grabbing 2 grade 20 starters to add to a 18 and 14 gives them a solid rotation that should give them a good shot at a playoff appearance.

#4 Wrigleyville M.Minoso OF Wrigleyville interupted the run for starters with an OF pick. With a staff headed by Drabek, Mays, and Koufax, Wrigleysville went for a 3 OF’er with 11 hit numbers, including 4 power 0’s with 10 1’s. He should fit nicely with Yaz and either P.Guerrero or E.Combs.

#6 Hollywood D.Radatz RP With several good starters out there, Hollywood surprised me by selecting a RP, but with a bullpen lacking a Z relief specialist, I can see the need. He got his closer and saved some money as Radatz is only about 2.7 MM.

#8 Wainwright M.Parnell SP Wainwright needed pitching and they got it. A 19 grade starter with over 1400 BF will come in handy on a staff needing BF’s.

#9 Charm City D.Martinez SP With a couple of 18’s available, Charm City made the smart play by taking the 17 with 5 good years left in his career. Good pick for now and the future. Also pairs nicely with J.Palmer.

#10 Southlake Larry Gura SP Gura fits the role of a #2 starter as his grade 16 slots in behind some guy named Pete Alexander. It also gives Southlake 7 Z starters.

#11 Fantomz B.Nicholson OF The Fantomz opted to stay with their 9 starters and went for Nicholson. His 4 power numbers with 16 1’s and a total of 11 hit numbers makes him a great compliment to L.Doby and gives the Fantomz four defensive grade 3’s in the OF.

#12 Boston B.Harvey RP Boston was in need of a bullpen arm and Harvey fit the bill. A grade 17, Harvey can set-up or close. He just needs to be careful with his W.

#13 Stratford V.Law SP Stratford went for the highest grade starter on the board and took Law and his grade 18. He’ll pair up with D.Trout’s 17 to give Stratford a tough 1-2.

#14 Virginia W.Alvarez SP Virginia just wanted the highest grade starter they could get. Started to pick Fitzsimmons because he has 4-8 good years still left in his career, but,…went with Alvarez.

#16 San Tan Valley F.Fitzsimmons SP San Tan needed a higher graded pitcher to head up their mound corps. And Fitzsimmons’ grade 16 was the Ace available. That makes about 7 picks that have stepped into the role of Ace.

#17 KC A’s J.Fassero SP With six splitgrade pitchers spotting the rotation, KC went for a solid grade 15 starter to balance out their staff. Fassero’s addition should free up a few splitgrades to help out a thin bullpen.

#18 Fire Lake B.Murcer OF With the philosophy that good starters are better than relievers, Fire Lake took a power OF’er with a 3 defense rating. Along with V.Pinson, E.Davis, B.Oglivie and P.Rose, Fire Lake has an enviable OF arrangement to pick from.

#19 Lewisberry DJ LeMahieu 2B I like this pick,…but then again, I am a LeMahieu fan. He produces and is very versatile. Plug him in and watch him go. Big improvement over S.Sax.

#20 Chicago S.Hofman OF Gotta admit I never heard of the guy. So I was surprised when Chicago selected him when he had Griffey Jr., M.Trout and JD Martinez. But then I saw Hofman’s numbers. Not bad, four power numbers, three 7’s for a total of 11 hit numbers. Plus he can cover 1st and 3rd. Not shabby.

#21 Motown D.Camilli 1B A defensive grade of 5 at 1B, Camilli anchors an infield that has a 9 at second, a 4 at third and a 9 at short. Lock down. Camilli also hits. With five power numbers and ten 1’s he’s a real nice addition.

#22 Purry D.Kile SP Another pick that steps in as the Ace of the staff. I had him ranked high in the SP category and consider him a steal at the 22nd pick. Nice grab.

#24 Hoboken M.Bishop 2B It wasn’t a surprise that Hoboken took a secondbaseman here,…he definitely needed one. I just thought it would have been F.White or B.Herman. But Max is a solid selection. He may only have 9 hit numbers,…but oh my lord those walk numbers!! SEVEN walk numbers. With a .423 OBP he may play out to better that that. Can you say top of the order?

#25 Jack Street D.Taylor SP This was not a dumb pick (pun intended). Jack St. was in need of some double-digit starters and Taylor was one of the better choices out there. The grade 15 makes him the ace of the team. Jack St. later added D.Neagle to give him a pair of starters graded 13 & 15.

#26 West Michigan S.Blass SP West Michigan likes starters. He has 12 to go with his 4 relievers. So this pick was easy to see coming. Blass will slot in as the #2 starter behind Schumaker.

#27 Detroit B.Henry The top reliever with a grade 24 and he was sitting on the board at the 27th pick. With 12 starters already and only 3 relievers, this was a no-brainer.

#28 Havana V.Blue SP With 11 relievers on the team, starting pitching was thin. Oh, look. Thers’s Vida Blue. Grab him! He did. Blue’s grade 14 will come in handy. Havana later added M.Pappas and his grade 13.

#29 Cincinnati J.Reuss SP Cincinnati now has four grade 14 Z starters to throw behind C.Kershaw. In fact, all Cincinnati starters have Z control. Good luck getting a walk from this staff.

#30 Fort Worth M.Ordonez OF I guessed pitching here and missed. Ordonez (who I like) has 11 hits with four power numbers. He should be a nice compliment to C.Williams.

#31 Coastline F.White 2B Coastline was short on money and did very well to come up with White (2.1 MM). With 5 power number among his 11 hit numbers, he will challenge J.Gordon for playing time.

#32 Clockwork D.Wells The reigning champs picked up another Z starter. He’ll take over the #4 slot in the rotation as Clockwork gears up to defend their title.

And that’s it. First round 2021 LEG Draft. In my opinion,…all good picks. But then, these managers are some of the best around. You wouldn’t expect anything less. Good luck gentlemen!